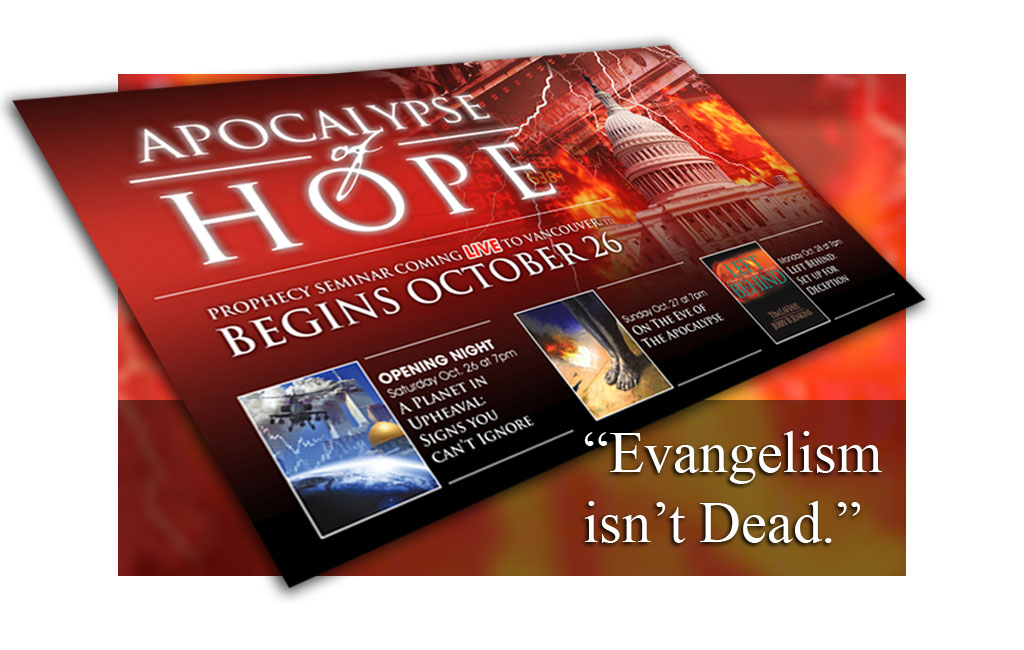 Dr. Walter recently wrote a blog post about his experience holding the “Apocalypse of Hope” prophecy seminar. SermonView’s role was to develop a marketing package for the event, including a new direct mail piece, a promotional video, roadside signs, and other materials.

“SermonView’s expertise contributed to an exceptional response rate,” said Dr. Walter. He’s been tracking the cost of bringing people through the doors on opening night, and since 2001 his average cost per person is $189. For this event, SermonView’s marketing campaign cut that by one-third, to $125 per person—despite a higher cost per mailpiece.

Dr. Walter is in favor of larger budgets, because it costs money just to get people in the door. “I figured out a long time ago, it’s the same amount of work if 26 people show up or 260 people show up. Spend the money and get higher results.”

Promotional video for Apocalypse of Hope

And what were those results exactly? Nearly two dozen people were baptized as a result of the series. Three of those decisions came on the last night as he made one final appeal to people to get baptized and become part of the body.

“One of those ladies had attended every night,” he said, “but had been holding off. And you could see on her face, ‘I give up…I’ll do it.'”

“It’s a lot of hard work,” Dr. Walter concluded, “but one that is well worth it.”

Read the entire post on the NPUC Adventist Leaders blog.